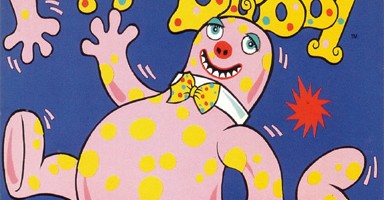 Mr Blobby is a British character in fact, and he appeared and was created deliberately for Noel Edmonds’ Saturday night TV show Noel’s House Party. Mr Blobby is described as a pink blob covered in yellow spots with big googley eyes and a constant smile on his face. Mr Blobby was portrayed by Barry Killerby and was the invention and birth child of British comedy writer Charlie Adams. Although the critical reception wasn’t good for Mr Blobby he was incredibly popular and was only ever designed to be used in the Gotcha segments of Noel’s House Party where he would prank celebrities in the costume and eventually would reveal himself as Noel Edmonds and say Gotcha to the celebrity prank victim.

As Mr Blobby was originally from Noels House Party as just a prank character there was no theme song for Mr Blobby. But due to his popularity Mr Blobby had many spin off VHS’s called Mr Blobby and Blobbyvision and those where to have the much loved and annoying opening children TV show theme song. The track was simply entitled ‘Mr Blooby Intro’ and we can assume was performed by Mr Blobby himself. To listen to the theme song or see a clip from the show be sure to watch the below YouTube videos.

Here are some great Mr Blobby pictures and Mr Blobby desktop wallpapers. You can download any of these images to your computer by right-clicking on the picture you want and choosing "save image as". Once you've downloaded one of these Mr Blobby images you can use it as your wallpaper etc.

Here are the latest high resolution Mr Blobby wallpapers which you can download right now.