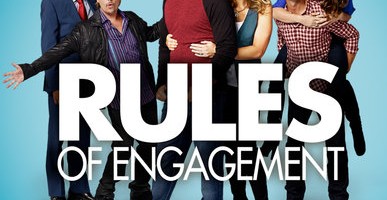 Rules of Engagement was a American TV comedy sitcom that ran for a duration of 7 seasons and spanned 100 episodes. The CBS show ran from February the 5th 2007 up until the 20th of May 2013. Rules of Engagement was produced by Adam Sandler’s Happy Madison productions. The premise of the show revolves around 2 couples and their single friend, who is joined by a fellow single friend in the third season. The show looks at the difference in styles and various relationship points. One of the couples is Jeff and Audrey Bingham who are a long married couple played by Patrick Warburton and Megyn Price. The other couple are  recently newlyweds  and looking forward to their big day, this is Adam Rhodes and Jenifer Morgan played by Oliver Hudson and Bianca Kajlich. Their single friend is Russell Dunbar who is played by the great David Spade. He is later joined by Timir Patel or Timmy as the call him played by Adhir Kalyan.

About The Rules of Engagement Movie Theme Song

As well as Rules of Engagement being highly successful it also has quite a good and catchy TV theme song. The song is played at the beginning of each episode. Throughout the introduction TV theme song we see a bed and it slowly fills up with all the character as they lay in the bed. As we see each character we are given their real name beside them. The TV theme song is a song by Senor Happy and is entitled ‘How many ways’. This song really works for the show as it’s a song about love and relationships.

Here are the latest high resolution Rules of Engagement wallpapers which you can download right now.